The Northern Ireland Commissioner for Children and Young People wants to know what children think about their rights. Get involved and tell the Commish what is important to you.

The Tale of the Commish’s Cape

To start our ‘Dear Commish’ project in June 2017 the Commissioner launched 'Create the Cape' to ask P1-3 children what was important to them about Children’s Rights. You can see more about it on this video, including what children had to say about Play: 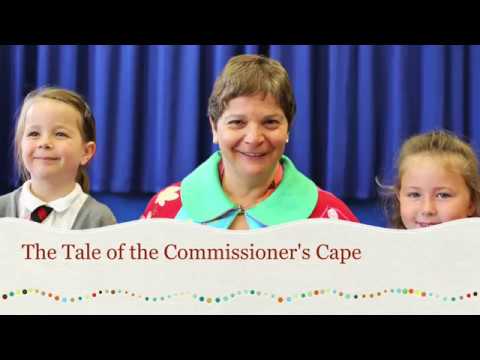 Over 180 children from across Northern Ireland submitted pictures on what they felt it was important for the Commissioner to know.

The pictures were grouped in to 8 themes:

Creating the Cape and how it will be used

These images were then sewn in to this cape that the Commissioner will use to help promote and explain Children’s Rights to young children.

A year after the project began the Commissioner officially launched her cape at Euston Street Primary School. Pupils from the school had helped design the cape and as you can see really enjoyed seeing the finished product!

Although the Cape project is finished we are still interested in finding out what is important to children in Northern Ireland. If you would like to submit a drawing for our online gallery, or you would like to see the cape in real life, please talk to our Participation team on 028 90311616 or participation@niccy.org.