COMMISSIONER for Children and Young People, Patricia Lewsley-Mooney today called for Government to do the right thing for Northern Ireland’s young people and enshrine their rights in legislation.

Speaking at her inaugural annual conference Mrs Lewsley-Mooney welcomed international speakers including Ombudsman for Children in the Republic of Ireland, Emily Logan, just 10 days after the Republic voted to enshrine children’s rights in its constitution.

“Across the world there is growing recognition that children’s rights are about doing the right thing for children,” said the Commissioner.  “They make society stronger by strengthening how we protect and safeguard children’s best interests.” 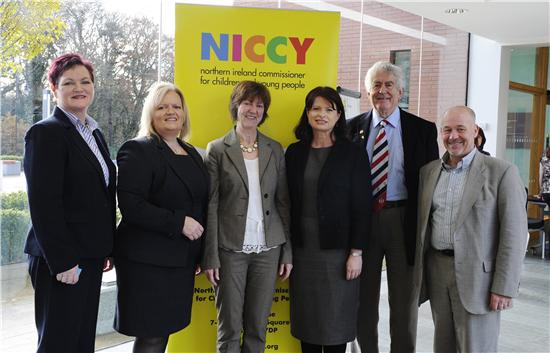 “I have been encouraged by Government ministers referring to the United Nations Convention on the Rights of the Child in some policies, but I believe they can now do more.”

The Commissioner welcomed Kirsten Sandberg, a member of the UN Committee on the Rights of the Child and leading children’s rights advocate to Belfast. Ms Sandberg was joined by Rhodri Morgan, former First Minister of Wales, Tam Bailie, Scottish Children’s Commissioner and Emily Logan, Ombudsman for Children (RoI).

“There is a growing momentum to include children’s rights in legislation” said Mrs Lewsley-Mooney. “For example the Welsh measure to the Children’s Act states new Government policies must have regard to the Convention on the Rights of the Child.

“Protecting children’s rights does not infringe those of anyone else. It is about the minimum standards children should receive in a society which values its young people.

“It is about a child’s right to the best possible education, the best possible healthcare, to always have their best interests considered and to make sure they have a say in the decisions that affect their lives.”

Mrs Lewsley-Mooney used the conference to call on Government to begin the dialogue to enshrine the UN Convention into Northern Ireland’s legislation.

“Since the Assembly established the Commissioner’s office in 2003 we have seen increasing gaps in children’s rights; I have, through research and legal casework, built an evidence base which necessitates children having their rights strengthened.

“I have seen for myself when children are being failed by us in health and education; I have heard from children whose voices are not listened to; I have seen the difficulties children with special needs have in moving to adult services.

“I have seen myself how young people’s mental ill health could be supported through adequate resourcing and early intervention; I have witnessed the impact of the lack of joined up service delivery for children in care and the juvenile justice system. I know more can be done by putting children’s rights at the heart of the legislative process in Northern Ireland.

“That is why I call on everyone who believes in the best interests of children and young people to join me in working towards a society which is fit for future generations.”