Launching a report on how certain adults can make a significant impact on these young people’s lives, Ms McCafferty said that a supportive approach can make a real difference to their future opportunities and welfare.

“We have to look beyond a young person’s behaviour to examine the circumstances that contributed to their offending and support them to make more positive decisions,” said the NICCY Chief Executive. “It is clear that one significant adult in a young person’s life can make a real difference.” 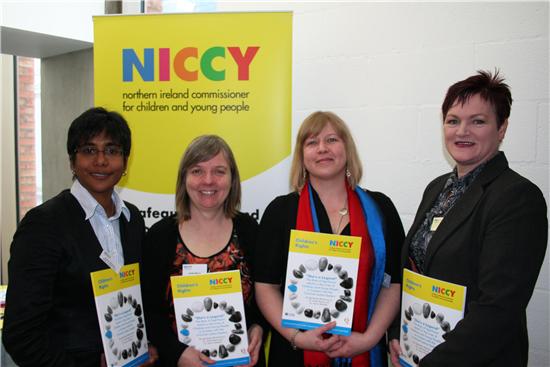 The Report – called ‘She’s a Legend’: – The Role of Significant Adults in the Lives of Children and Young People in Contact with the Criminal Justice System’ explores how relationships with social, youth and community workers, teachers and volunteer mentors can positively impact on young people’s lives and divert them away from the justice system.

Ms McCafferty continued “It is vital that organisations, which provide children and young people with one-to-one support, are given sustainable, long-term funding to enable them to deliver this, through a child centred and community based approach.”

“The legacy of the Troubles in Northern Ireland means that violence continues to play a major role in many of these children and young people’s lives” said Ms McCafferty. “They may also experience poverty, family breakdown, mental health problems, drugs, alcohol, domestic violence and negative peer influence.

“As a result they struggle in education and training, are often excluded from the job market, and find it difficult to develop and sustain positive relationships with adults and peers.“

Report co-author, Dr Linda Moore commented: “One young person explained how violence in their home had influenced their behaviour outside home, made it difficult for them to confide in and trust adults and contributed to them getting into conflict with the law.”

“In such cases, where a young person may have no one to turn to, a significant adult is vital in encouraging mutual trust and respect and supporting them in many ways. This may include developing key skills such as making telephone calls or appointments and facilitating their rights to access education, health services and accommodation.”

NICCY Chief Executive, Mairéad McCafferty concluded: “The young people who participated in the study want to improvetheir lives and make positive choices, despite their experiences and the many barriers confronting them.

“This determination, coupled with the support of a significant adult can positively influence their situation, build resilience and help to divert them away from the criminal justice system.