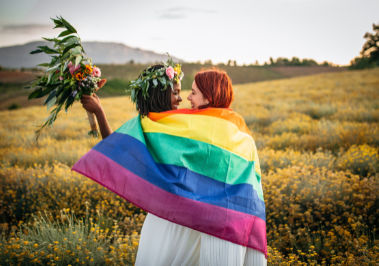 Following a series of meetings with children’s sector groups over the past year and through speaking with a wide range of children and young people, Koulla Yiasouma, Northern Ireland Commissioner for Children and Young People said,

Speaking during Pride Week the Commissioner continued, “The current debate surrounding marriage equality is about the rights of same sex adults to get married should they so choose.  However, it also affects the current and future rights of young Lesbian, Gay and Bisexual (LGB) people and as such, is a child’s rights issue and young people should be extended the same right to participate and engage in the debate.

“Equality is a key human rights principle which tells us that all people are equal before the law and are entitled – without discrimination – to equal protection under the law. In order for this to become the lived experience of LGB children and children of LGB parents, the opportunity to marry must be extended to include same sex couples.”

In her position statement the Commissioner acknowledges the extension of civil marriage law to include same sex couples may be an issue for some and believes it is important that a clear focus is kept on fundamental rights.  She addresses the concerns of those who may be opposed saying, “It is important to acknowledge that any extension of the law will not threaten or conflict with their rights.”

The United Nations Convention on the Rights of the Child (UNCRC) should serve as the underpinning framework for all decisions concerning children’s lives. Explaining its relevance to equal marriage, Koulla said, “The UNCRC reflects the importance of the family, noting that a child “should grow up in a family environment, in an atmosphere of happiness, love and understanding”. The term “family” is repeatedly mentioned throughout representing inclusive acknowledgement of the range of family forms.

“What is important to children’s well-being is the quality of the care, love, support and security they receive. Research increasingly shows the quality of children’s relationships with their carers is what affects their lives and life outcomes.”

The Commissioner states that the introduction of marriage equality legislation in NI would go some way to sending a message to LGB children and those being brought up in families with same sex parents, that they have an equal right to be safe and secure in the knowledge that their relationships are protected from discrimination. She says, “This would clearly have the best interests of the child as a primary consideration.

“There is clear evidence that prejudice and ignorance can cause lifelong harm and highly correlates with bullying and violence which can lead to mental ill health and depression, even suicide.  All children, irrespective of the sexual orientation of their parents, or their own sexual orientation, have the right to a safe and healthy childhood free from discrimination.”

Concluding on the importance of children and young people having a voice in the debate about equal marriage, the Children’s Commissioner said,

“The evidence clearly indicates that the majority of children and young people support the introduction of equal marriage in NI.[i] As the debate regarding same sex marriage affects children already living in same-sex families as well as LGB young people who may want the option to marry in the future, they should be included in these discussions in a purposeful and meaningful way”