Opportunity to Change the Course of Children’s Lives

COMMISSIONER for children and young people, Patricia Lewsley-Mooney, today urged the Northern Ireland Executive to change the course of children’s lives through the forthcoming Programme for Government.

Launching the landmark report ‘Barriers to Effective Government Delivery for Children in Northern Ireland’, the Commissioner said that she fears that, over the term of the previous Assembly, there had been a rolling back in practical measures to implement children’s rights but the Executive now had a chance to change that. 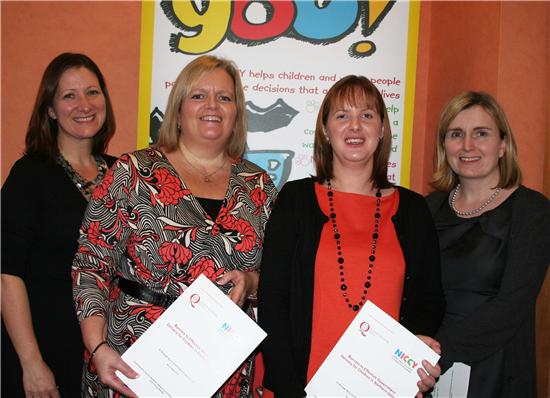 “I commissioned Queen’s University, Belfast to assess the effectiveness of government delivery for children in Northern Ireland,” said Ms Lewsley-Mooney. “It is clear from this report that there are significant barriers to the development and implementation of policies and strategies, and too often children’s rights and best interests have been sidelined.

Ms Lewsley-Mooney said that her job was to engage with children, scrutinise and advise and, where necessary, challenge government.

“When the Assembly created my post they outlined a clear set of duties for me, including advising government when I believed they were failing our children.

“In doing this I have been advising our Executive on how they can bring about positive change for children: before they start school, when they are in school, when they need health and social services support; and when families and their children struggle to climb out of poverty.

“If there is a clear commitment in the Programme for Government to children, and to making sure that departments work together to co-ordinate their efforts in delivering for children, then the vision of political leadership changing the course of children’s lives for the better can become a reality.”

‘Since the May election I have met all the new Executive ministers and I have shared my concerns with them about how effectively they are delivering for children. Just this week I met with the Junior Ministers Jonathan Bell and Martina Anderson to discuss this report, and their commitment to ensuring real delivery for children is very clear.”

‘However, concerted action must be taken to overcome the barriers to effective delivery including training on children’s rights for government officials, seeing where budgets are spent on children, a more ‘joined up’ approach to planning and delivering services for children, better information and analysis, and meaningful participation of children in developing and implementing strategies and policies.

“While we have many well-intentioned strategies, we need to see strategic visions translated into concrete, specific and measurable outcomes for children.’

Ms Lewsley-Mooney concluded: “Some good practice has been identified in this report, but on the whole it does not paint a positive picture of government delivery for children. However, although it clearly identifies the barriers to effective delivery for children, it also provides advice on how to break through those barriers.”

“When I complete my final term in office in four years time I hope that I will be able to provide a very different report on how government is delivering on children’s rights and best interests, and that each and every child in Northern Ireland will be able to see how the work of the Executive has made their lives better.”

A copy of the report: Barriers to Effective Government Delivery for Children in Northern Ireland can be found below:

Later in November the Commissioner will:

“Today’s launch and the events in November represent the culmination of concerted efforts by me to emphasise to Government that children must be at the top of the agenda in the Executive’s thinking,” said Ms Lewsley-Mooney