Time for Government to Act to Make It Right

COMMISSIONER for Children and Young People, Patricia Lewsley today (Tuesday) said Government must act to Make It Right after she helped deliver more than 2,000 messages from children to Northern Ireland Executive Ministers.

The Commissioner’s year long campaign saw school children and young people campaign on issues that affect their lives and their friends. Today at Parliament Buildings, Stormont, children personally handed Government ministers and their representatives the messages on 12 key topics including child poverty, play and leisure and community safety.

“Throughout this year children and young people have been urging Government to listen to what they say, to value what they say and to act on what they say,” said the Commissioner. 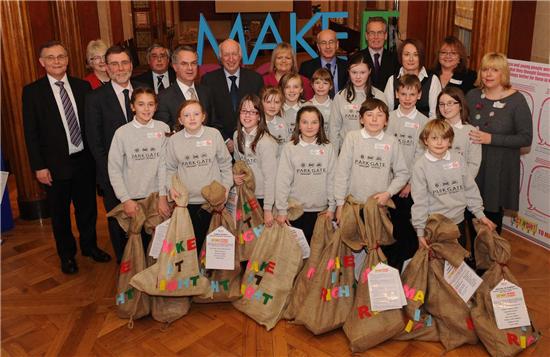 “This year my ‘Make it Right’ Campaign has shown that children and young people can campaign on their own behalf on each of the issues that affect them.

“I am humbled by what they said, and I am honoured to pass on their messages, their pleas and their ideas to our Government.” Each of the Government departments today (Tuesday) received children and young people’s messages at Parliament Buildings.