The Commissioner spoke at joint NICCY and CINI seminar called ‘Why children’s budgeting matters’. The Commissioner also launched a report and this was followed up by a discussion on the issues raised. 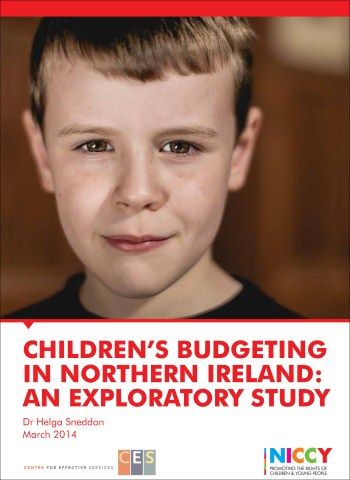 It’s my job now to set the scene for our later speakers by answering the question: ‘Why does children’s budgeting matter?’ Why take valuable time out of your busy work day to come together to consider this issue?

But first I perhaps should answer the question: ‘What is children’s budgeting?’

‘Children’s budgeting is about looking at how much, and how well, money is being spent by government to help children and young people. It is about examining the resources that national and local government allocate to policies, programmes and services that benefit children and young people, and about whether these adequately reflect their needs. It is about assessing whether children’s rights are effectively enabled by a government’s budgetary decisions. It is about looking at whether the policy promises that governments make are backed up with money to make them happen.’

So it is about seeking to determine whether government is, as it were, ‘putting its money where its mouth is’ in relation to delivering for children. When the UK government ratified the UN Convention on the Rights of the Child back in 1991, this meant agreeing to take on the responsibility of implementing it in full.

Article 4 of the UNCRC states that ‘States Parties shall undertake all appropriate legislative, administrative, and other measures for the implementation of the rights recognized in the present Convention. With regard to economic, social and cultural rights, States Parties shall undertake such measures to the maximum extent of their available resources and, where needed, within the framework of international co-operation.’

How can governments demonstrate if they are meeting their responsibilities ‘to the maximum extent of their available resources’?

(It said that:) ‘the lack of consistent budgetary analysis and child rights impact assessment makes it difficult to identify how much expenditure is allocated to children across the State party and whether this serves to effectively implement policies and legislation affecting them.’

So, it is through the analysis of budgetary expenditure on children, along with an assessment of how effective the measures funded have been in delivering on children’s rights.

This reflects the challenge from the Committee in 2003 in relation to ‘making children visible in budgets’ in General Comment 5, where it stated that:

‘No state can tell whether it is fulfilling children’s economic, social and cultural rights “to the maximum extent of available resources”, as it is required to do under article 4 unless it can identify the proportion of national and other budgets allocation to the social sector and, within that, to children, both directly and indirectly. Some states have claimed it is not possible to analyse national budgets in this way. But others have done it and publish annual “childrens budgets”.’

So it’s as simple as that? Of course it’s not. It is easy to say these things, but more difficult to do them, in practice. Recognising this very point, in 2007 the UN Committee on the Rights of the Child held a Day of Discussion on budgeting for children, where it provided further guidance to states.

It made a number of points, including that investment in children potentially has a high economic return, making the argument therefore that states should make children a priority in budgetary allocation to maximise the return on their resources. The Committee also emphasised that budgetary allocations to economic growth should not be made at the sacrifice of expenditure on the ‘social sector’, particularly in relation to children.

Interestingly, the Committee encouraged states to consider legislating for a specific proportion of public expenditure to be allocated to children, accompanied by a mechanism for independent evaluation.

A number of recommendations were made in relation to how to take forward budgeting for children. These included: making investment in children visible through the detailed compilation of resources allocated to them; and encouraging public dialogue on state budgets through providing accessible information and encouraging literacy in budgetary analysis – with children as well as adults. The Committee said that the monitoring and analysis systems should be rights-based, and that child rights impact assessments should be used to determine whether expenditure in all areas are promoting the rights and best interests of children.

Back in 2006, as a result of conversations between NICCY, OFMDFM and DFP on budgeting for children, the three bodies jointly commissioned two reports into spending on children in Northern Ireland. These reports were published in 2007, one looking at Annual Managed Expenditure and the second on Departmental Expenditure Limits, both comparing the expenditure on children in Northern Ireland with that elsewhere in the UK. While some comparable data was available, in many areas this proved difficult to identify. However, in a number of critical areas, it was possible to make some informative comparisons. One such area was personal social care and community expenditure for children, and it was found that spending on this in Northern was the lowest in the UK, at £287 per child, compared to £402 in England, £429 in Wales, and £513 in Scotland.

These reports demonstrated the challenges of trying to bring visibility to children in budgets, while giving a glimpse of the valuable information that can be derived from budgetary analysis, where those challenges can be overcome.

In conclusion, I should come back to the question I am supposed to be answering: ‘Why does children’s budgeting matter?’ In short, it matters because it helps to bring clarity as to what is being delivered to children by government.

It particularly matters in times of economic crisis, such as the recession we have found ourselves in over recent years. Too often, when there are limited resources, critical services for vulnerable children can be seen as less vital, ‘soft’ services, and perhaps an easy place to make hidden cuts. There is an onus on Government to be open and transparent in the cuts it makes, to enable public debate on what are clearly difficult decisions. And, as I outlined earlier, the ratification of the UNCRC has placed a responsibility on Government to do all it can to protect children from budgetary cuts and ensure there is no regression in delivering on their rights.

For all these reasons, NICCY has maintained a focus on budgeting for children. Last year, in attempt to bring greater clarity to how money is allocated to children’s services, we commissioned CES to undertake an exploratory research project for us. We asked them to look at the flow of money from the block grant at the highest level, down through the administrative structures to spend on the ground for children. This was ‘exploratory’ in nature as we were not sure whether this was possible, if the information was available in the appropriate format to do this successfully. But, whether or not it was possible, we were confident that there would be useful findings from the project, and that – at least – it would bring clarity to the nature of the challenges in bringing visibility to children in budgets.

Before I hand over to Helga Sneddon, who took forward this project on our behalf, to present the findings, I want to express our thanks to CiNI for their support in this work. Mairead has already mentioned CiNI’s strategic focus on children’s budgeting. Pauline and her staff have been generous in providing advice to NICCY on this piece of work, and so it is appropriate that the report is launched at this joint seminar. We are also grateful to the members of our Budget Advisory Group who provided feedback on the project as it progressed. They are:

Thank you all. And now, I’ll hand over to Helga to present the findings of ‘Children’s budgeting in Northern Ireland: an Exploratory Study’.