Almost 1,700 individuals and organisations have told the Northern Ireland Commissioner for Children and Young People, Nigel Williams, what he should be doing over the next three years!

Today the Commissioner publishes online the results of the ambitious SHOUT consultation staged from October, 2004 to January this year as well as his Corporate Plan 2005-2008 and Business Plan for this year.

The plans were submitted to Ministers for approval in March, but the General Election period delayed their approval until now.

A key part of the SHOUT consultation was asking children, young people and all those interested to tell Mr Williams what they thought of his 14 draft priorities for the next three years.

“I was overwhelmed that so many people took the time and effort to respond to SHOUT, given it was not a controversial issue,” he said. “And they were clear that they agreed with most of our priorities.

“As a result of the consultation we have changed some of the ways we describe the priorities and have added a further priority, – risk taking behaviour among children and young people such as sexual activity, and abuse of drink and drugs. Young people in particular were anxious that NICCY should look at this important area”

The priorities are now:

These three areas are the fundamental building blocks of NICCY’s work and will influence our actions in the remaining 12 priority areas:

“In each of these areas we are developing a programme of action spread over the period of our 3 year plan. This includes communications, participation, research and legal activity as well as our ongoing work to listen to and act on the complaints children and young people have about the services they receive and the way they are treated,” said Mr Williams. “In addition I will be advising Ministers of any policy changes that are necessary in each priority area”

“I am confident these priorities mean everyone in the NICCY team can work to make sure we are delivering on our goal to promote and safeguard the rights and best interests of children and young people in Northern Ireland and to work with them to challenge and change the world in which they live.”

Further information on the work of the Northern Ireland Commissioner for Children and Young People is available on www.niccy.org.

The SHOUT Analysis and Corporate Plan are available here.

An innovative megaphone was developed with respondents able to provide their opinions via post, email, SMS text messages and a web site. 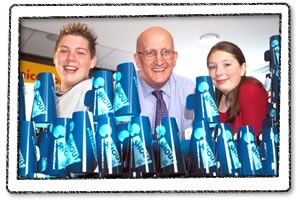 Northern Ireland Commissioner for Children and Young People Nigel Williams launches the results of his SHOUT consultation, along with NICCY youth panel members Dan and Catherine. Almost 1,700 people and organisations told the Commissioner what his priorities should be over the next three years.