PUPILS from Parkgate Primary School were recognised for their work on child poverty by the Northern Ireland Commissioner for Children and Young People (NICCY), Patricia Lewsley, today.

NICCY’s ‘Make it Right’ campaign, launched earlier this year, encourages children, young people, parents, carers, and teachers to campaign on children’s rights issues and bring their messages directly to the attention of decision-makers. 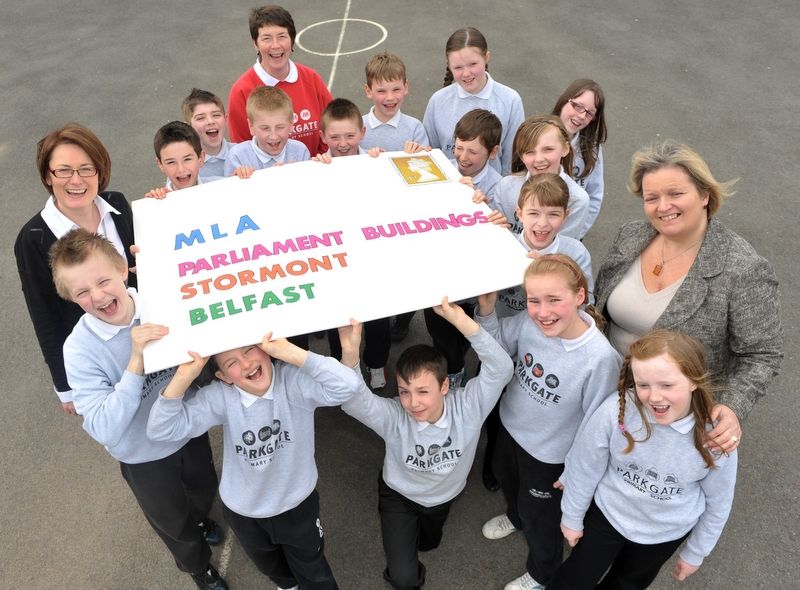 To highlight the affects of child poverty, young carers and community safety primary 5-7 pupils at the school took part in a series of workshops. Pupils then drafted a letter outlining some of their concerns to South Antrim MLA David Ford.

Mrs Ferguson, Senior teacher at Parkgate Primary School, said:   “As a Rights Respecting School we were more than happy to take part in NICCY’s Make it Right Campaign.  We welcome the opportunity to raise the children’s awareness of how to campaign on local issues.  NICCY’s emphasis for June is places and spaces for play, leisure and recreation. During this month the children are intending to campaign for the provision of a much needed play area in Parkgate.”

Speaking at the event Ms Patricia Lewsley said:  “I am delighted to see that these young people are working hard to help raise the profile of some of the issues that affect children and young people in Northern Ireland.

“Through this letter they are using their voice to highlight child poverty, which can have an impact on many areas of a child’s life, from bus prices for 16 and 17 year olds to good childcare for children so parents can work.

“I congratulate everyone at Parkgate Primary School for their hard work and would encourage other young people in the area to get involved and campaign on some of these issues too.”

This month through the ‘Make it Right’ campaign, NICCY wants government to make sure that a greater emphasis is put on protecting children instead of punishing, stop using ASBOs against children and do more to overcome community divisions.